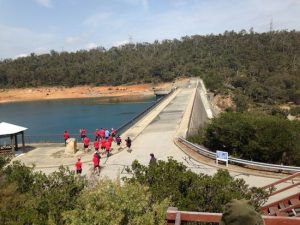 “On 30 October our Year 9 classes went on an excursion to Victoria Dam. We went to view the structure and uses of the dam in Perth, and to find out why it is so important. We also learnt about the changes made to it over the years and how they have worked and improved the dam. It was a bit of walking, but it was interesting and I’m sure most people learnt something new.

We left school in the morning, after devotions, and all hopped on the bus heading to Victoria Dam. When we got closer we could see the Victoria Dam pipeline. You could see the contrast of the old, rusty pipeline, compared to the new concrete pipeline which they now use. We walked along the track leading from where the bus stopped for a while, and we could see that the vegetation had received just enough rainfall to sustain it.

We first went to the new dam wall and walked across it, and saw that it was a gravity dam. On the side where there wasn’t any water you could observe how they actually laid the concrete walls for the dam. It was laid in thin layers so they could quickly dry and harden. Then they would pour the next layer. This was done because concrete expands when it dries and heats up, so if you laid it all in one go it would expand and cracks would occur. Also, it would take a long time to completely dry. The side is like steps leading all the way up, as you could see the layers. 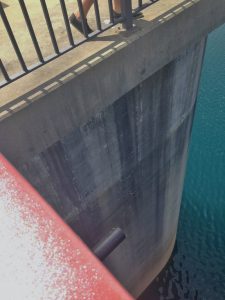 The water in the dam is not very high at the moment as there hasn’t been much rainfall this year. You can see the line where the water was over the last couple of years. This shows people how in the last few years the amount of rainfall we have had is definitely going down. The water is really clear and fresh there, so for that reason you cannot bring animals in or spill anything there as it increases the risk of contaminating the water. However, you also cannot drink this water as it is not filtered and has bacteria in it which is dangerous to human health.

As well as the new dam wall, there is also an old one. The one they use now was not the original Victoria dam wall but the second to be made. You can still see parts of the old dam wall, which is now mostly gone. It was made of concrete and rocks, as you can see from the pictures. This mixture however, proved to be porous and let water through. To fix this, they put concrete layers around it so water couldn’t get through. When they decided to replace the old wall, they destroyed most of it, and then just let all the water flow out and didn’t worry about conserving it. They then built the new wall, quite quickly too, so it was finished by the time it was winter and rain would fill it up again.

After we had looked at all these things, and discussed them with our teachers and peers, we started to head back. We all hopped back onto the bus and drove a little bit until we stopped and got out to look at a grave belonging to the family of workers who worked at the sawmill. The grave was of a baby who had only lived for two days.

After this we went all the way back to school and it was the end of our excursion. It was interesting to learn new things that most of us wouldn’t have known before we went. I know that I didn’t know much at all about Victoria Dam before we started talking about it at school so I found it good to actually go and visit it.” – Eryn 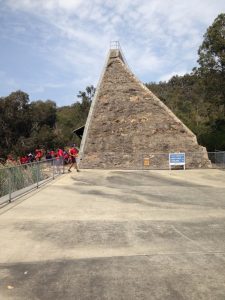 “The trip to the Victoria Dam was a learning experience and seeing new sights really made me want to spend more time outdoors. Learning about the history of the land helps to mould and change one’s perspective by making the person think. That is what was most changing about the field trip it made me to have more appreciation for the dam and how it was made also for the hands that helped to build it. The field trip helped me to acknowledge people’s perception of place and how that shapes the way we act and think.” – Daniel

“I think that going to the Victoria Dam was very eye-opening. I really got to see how much Perth is in need of water. By looking at the water stains on the wall of the dam it is hard to imagine how high the water level used to be. I now think that I need to do a better job of saving water and reminding others to also save more water. Other than learning about water security, I think the view from top of the Victoria Dam wall was really beautiful.” – Rachael