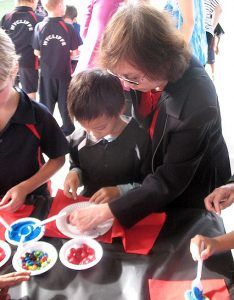 There was a buzz in the air today, as boys from Kindy through to Year 6 spent an afternoon with their mum, grandmother, or aunty at our Mum and Mini Men MasterChef afternoon tea.

The afternoon started off with our special guest speakers, Mr Ray van der Kooij and his mother, Mrs van der Kooij. Ray shared about the importance for boys to show affection towards their mums, and to never stop giving their mums hugs… no matter how old!

The mums and their sons were then divided into two groups: one group participated in a biscuit-decorating contest, and creative culinary skills were put to the test. The other group flexed their muscles and showed off their wheelbarrow skills in a human wheelbarrow race. The rules were simple: only one person from each family was allowed to be the wheelbarrow, but the rest of the family had to get to the other side… in some shape or form!

The afternoon ended with prizes for the most creative biscuits, and the overall champion for the wheelbarrow race. Each mum received a wooden kitchen utensil with a memory verse and the caption “Mums kitchen… everything stirred with a spoonful of love”.

Well done to all who were involved! It was a most enjoyable afternoon and both mums and mini-men left with tummies full and hearts blessed.