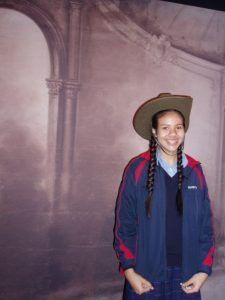 We are very pleased to share with you reports from two of our Year 9 students – Grace Bong and Rachael Fleming – who have written about their experiences visiting the Perth Museum, which was undertaken as part of their Humanities studies.

In the morning after our Bible reading at school, we got on a school bus and travelled to Perth city. The bus then dropped us of just a few metres from the museum entrance.

We walked in the foyer then walked through some old houses/buildings and into the museum. In the museum were photographs of the diggers/soldiers, those who died or were injured. There were a lot of interesting stories behind the photos.

One of the photos was of an Australian soldier who after the war married a local Vignacourt girl. Some photos showed the photographer’s son which was really cute. One of my favourites, if not the favourite was of a photograph of a Chinese general. Something about the quality of that photo just made it stand out from all the other photos. It was like even though it was black and white there was a lot of depth in it. You could just see the expression in his eyes. What I liked about the photos was that even though they were soldiers of war, there was a smile in their eyes as the photos were taken, and it was probably the first time in a long time that they would have had a great time getting their pictures taken. I had a good reflection on the lost diggers.

After the museum we walked into the city where we had lunch. Then we walked to Esplanade Bus Port. I was surprised at how easy it was considering we were a big group walking through the city; personally I think it was less stressful than I thought it would be. Everyone did almost what the teachers said and asked. What I noticed was even though it was a modern city they still left some old building or streets still existing.

When we got to Kings Park from the bus we walked to the 10th LightHorse monument. When we walked to the monument it was an unbelievable to see the number who died. There was also a plaque in memory of Hugo Throssel, a Victoria Cross winner at the battle of the Nek. We then walked to the statue of Queen Victoria; she was a key figure in her time, and she was the longest reigning monarch until our current queen.

When visiting the war memorial, the view of the city never gets old, if I was a new person visiting Kings Park, I would be blown away by the views. When we walked to the undercroft area it made me realise how many people actually died then; seeing all the names on the walls who died in the war and are honoured for that.

The journey on the way back was good, except when we had to stand in the bus and train for other people. The walk back was fun, just walking alongside one another made me really appreciate everyone and the trip educational and to my surprise, stress free.

Excursion to the City

The first thing that we did was go to the Perth Museum to see photos of the Lost Diggers of Vignacourt. The moment that we entered the museum it felt like a silence had gone over all of us and a sense of respect was felt. The anticipation of going to see the photos was too much and as the lady spoke to us excitement was building up in me. When we entered the room it was dark and silent and I think that it was very appropriate that it was like that as it seemed more respectful.
One by one I walked past the photos that each had a single light on them, of all the Australian diggers with big smiles on their faces. It seemed sad that they were so unaware of the perils that they were going to face. It was cool to see so many of the diggers with their sheepskin jackets on, showing that they were proud to wear what their family had made back at home.

After the museum we went to have lunch. It is so strange how it is so easy to buy food when back in the time of the war they had to work for their food and if you were fighting in the war you had a shortage of food every day and only had rations. It kind of makes we feel greedy when I can easily just go down to the shops and buy a packet of chips or a can of coke.

After lunch we went on the bus to go to Kings Park. I really enjoyed that ride and seeing all the buildings and the strange architectural constructions. I also saw a coca cola truck in the city and thought again how easy it is to drive the product to the shops and then have us buy it. The bus is such an easy way to travel around, and in the city it’s free which makes it better. In the time of the war people had to walk or ride horses and vehicles were just being invented.

The 10th Light Horse monument is what we saw next. It honours 301 fallen men who served for the Light Horsemen during World War 1. I think that it was good how they got their own memorial as they had to go through two battles basically. They had to go fight in the Gallipoli Campaign and those who survived went back ride in in the Light Horse Regiment during the Desert Campaign in Sinai and Palestine.

We also saw the statue of Queen Victoria and she looked very grand and noble the way she was captured. I think that she was very significant as she was the grandmother of all the nations as her children married off into other countries like Germany, France and Russia, which makes her very important.

The view from Kings Park of the City was amazing I really liked it there as the gardens are beautiful and the place is so peaceful and full of respect. From a certain place you could see everything including the city, the river and you can kind of imagine the boats of the men sailing away for war. I think it was a great idea to put the war memorials there as you can really find it a respectful place.

We also went to the whispering wall which was amazing how you could say something and the person on the other side could hear you and you could basically have a full on conversation. I also liked how they wrote all the different battles on the side of the whispering wall. I thought the fire in the middle of the pond was reflective and I liked how it said around the edge “We Will Remember Them”.

The War Memorial was really special and it looked grand and powerful in the white colour and it stood out with the background of the city behind it. We went around the back and it was like a little cave inside with hundreds of named written on the walls. It was thought provoking but sad at the same time that so many men died in that war. One thing that made me happy was that I found someone called FLEMING J so I wonder if we are related.