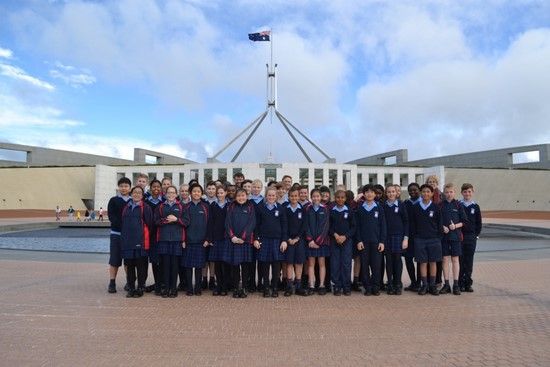 After another incredibly fast paced tour of the sites and the learning opportunities of Canberra, we are back. The Year 7 trip to Canberra forms part of our students’ studies on the Federal Government, our Constitution and the history of Australia. There were many positives for your children as they developed friendships and experienced many new and interesting places in Canberra in the week leading up to a Federal election.

Each day held highlights of its own and different students enjoyed different aspects of each activity. You can read more from the students here at the trip blog.

It all started on Thursday, 23 June 2016 as we waited patiently to fly to Canberra via Melbourne after a two-hour delay because of the late arrival of an incoming flight. However, Qantas made arrangements for us to catch a later connecting flight in Melbourne, so staff and students just relaxed and enjoyed each other’s company.

On Friday, 24 June we visited the Australian Royal Mint, the Museum of Australian Democracy at Old Parliament House and the Electoral Education Centre, where we learned about how preferential voting works in Australia by voting for our favourite fruit. Then we visited Parliament House, toured the Senate, the House of Representatives and undertook role playing at the Parliamentary Education Office.

On Saturday 25 June we visited Cockington Green to view the miniature villages, travelled to Gold Creek Station where we experienced an Australian kelpie working the merino sheep, watched sheep shearing and participated in sheep wrestling!! On the way back we took in the views of the Parliamentary Triangle from Mount Ainslie Lookout. Then onto the Australian War Memorial where we saw the Wall of Remembrance, the Tomb of the Unknown Soldier and viewed audio visual shows.

Sunday 26 June it was off to Church at St Andrews Presbyterian Church taking in the old architecture, stained glass windows and enjoyed meeting the friendly congregation. We then took a stroll along Reconciliation Place and the Australian of the Year Walk. The afternoon was spent enjoying Questacon, particularly the show on tasty science, and the free drop slide (for some students many times).

Then on Monday 27 June we went to the Australian Institute of Sport, did a tour of Government House and learnt about the Governor General’s role. We then headed back to the Australian War Memorial to look at the displays, stayed for the wreath laying ceremony, and laid our own wreath. After dinner we headed out to the National Dinosaur Museum.

Tuesday 28 June we took a lengthy drive out to the Canberra Deep Space Communication Complex for a very interesting insight into our universe, we visited the High Court of Australia, the National Portrait Gallery, where we sketched our own drawings, and finished the day at the National Museum of Australia. The evening was spent watching and judging our students in their own “talent show”.

Then there was Wednesday 29 June – a day in the snow at Perisher!!! What a great day playing in the snow and tobogganing. In the evening we went back up to Mount Ainslie to enjoy the view of the city at night time.

On Thursday 30 June it was time to pack up and load our gear onto the bus as we headed out for a long day before catching our flight home! We had a busy and tiring day visiting the Embassy of the Republic of Indonesia, where we put on a shadow puppet play and played in a Balinese gamelan ensemble. We then headed to CSIRO followed by the Geoscience Centre, where we created our own earthquake and recorded it on a seismometer. In the afternoon we headed to Canberra Airport, boarded the plane and finally arrived at Perth airport. HOME!

A great and busy experience was had by all, and we received lots of positive comments regarding our students’ behaviour.

The Australian Government recognises the importance of all young Australians being able to visit the national capital as part of their Civics and Citizenship education. To assist families in meeting the cost of the excursion, the Australian Government contributes funding of $240 per student (the Parliament and Civics Education Rebate ‘PACER’ programme) towards the cost. This rebate is paid directly to the school upon completion of the excursion. We really appreciate such support and funding.

I would like to thank the students for making the trip a great experience and parents for all of your support before and during the trip. Thanks must go to Mrs Jones in our office for her work helping organise the trip.

Thank you also to the teachers who accompanied us on our trip – Mrs James, Mrs van Wyk, Miss Khoo and Mr Peletier for all their help. Without our valued staff this experience would not happen for our students.