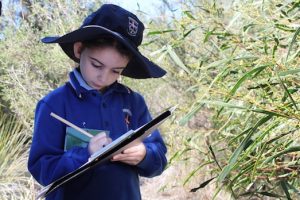 Last Thursday, the Year 1 and 2 students took the great trek to Whiteman Park near the Swan Valley. There was much excitement on the bus, and after many “are we there yet(s)?” we finally arrived! We had recess in the beautiful grounds, and then we were split into two groups.

Group One went to an old school house where they were shown the gentle-natured Blue Tongue Lizard and sleepy Bobtail Lizard. The students got to touch both lizards and learnt some interesting facts about each lizard. They were then split into teams where they had to explore the flora and fauna in The Children’s Forrest, and answer some questions about specific plants.

After having great fun in the playground, Group Two travelled back in time on Whiteman Park’s very own Vintage train. Unfortunately the train “ran out of steam” and broke down half way, however, the students got the opportunity to explore the Transport Museum while the train was repaired!

Both groups joined together to share lunch, and although some lunches were so appetising that the birds decided to steal some, everyone was having a wonderful time.

After lunch, Group One had a chance to play in the big playground and then boarded the vintage steam train. This time, it was “full steam ahead” and we were lucky to spot some kangaroos enjoying the sun, and some students got to ride in front with the conductor!

Meanwhile, Group Two explored The Children’s Forrest and spotted some GIANT ants and even an eagle’s nest.

The day ended with rosy cheeks, bubbling laughter and lots of chattering. The journey back was somewhat quieter for some as weary eyes started to close.

Thank you to all the mums, dads and teachers that helped on our excursion. It was certainly a day worth remembering.

Here is what some children had to say:

“My favourite part was the lizards” – Jeremy Seet, Year 1

“I loved the train ride. It was the best!” – Benjamin Steadman, Year 1

“I went down the big slide, I liked that a lot!” – Christopher Martin, Year 2