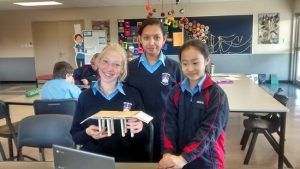 Our learning extension students have seen a busy two weeks of designing, building, and testing bridges. Having designed and tested our bridges to try and make them strong enough to carry a 1kg weight, the engineers in the LEX@R classroom faced the rigours of the Year 12 Physics students.  The Year 12s tested the weight bearing capacity of our designs, but also made insightful comments on the strengths and weaknesses of each design.

They awarded first prize to a design by Allira Terpstra, Mukho Naw, and Lena Yang which managed to support 1.25kgs, plus the whole box of weights from the Science Department. In second place were Darcy Terpstra and Grace Williams whose bridge supported 1.75kgs and was a good stable design. And third was given to Sofia Soloveva and Aynsley Vivian whose “quite marvellous” construction was commended as strong (perhaps due to the amount of glue employed in its construction). Two bridges were also commended for their attempt at a beautiful design; those by Allyah Gowans and Eve Gibbon and the suspension bridge.

A special mention must go to the only team who attempted a suspension/cable stay bridge across a much wider span – Rabecca Hulston, Esteban Weesner, and Michael de Jongh. Points for courage and perseverance!

Well done all, and a big thank you to Mr Nightingale and the Year 12 students who graciously gave up their time to judge our work. Now onto debating metaphorical bridges!