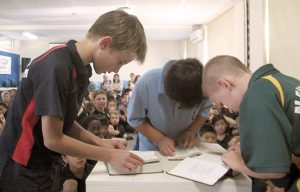 There was movement through the classrooms
As the word had got around
The Bible Tournament was on – TODAY!
Wycliffe vs Newton vs Tyndale was the stoush
We all had come to cheer for our house!

The Quizzler did appear in eccentric crazy hat
With questions more and more
So we all could have a score.
The pace was a cracking,
Cleverness was not lacking
The best house on the day would win, not draw.

The victors were the team
Who wore the gold and green
And knew that Mary was the sister
To the dead man Lazarus
And other useful facts.

Wycliffe put up a fight
And showed that they were right
About the Jordan and that hero Gideon
Others joined the fun, racing to that Bible place
And tasting mystery salt –pulling quite a face.

It was a fine display of Bible acumen and say,
It was a bit of fun for all
Crammed in our new big room
The cheering really did boom
That fine Thursday. 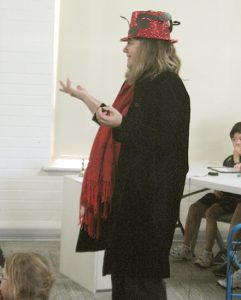 Thursday saw the Senior Bible Tournament take over house meetings, for the first time in our new double classroom. The students performed very well and attempted many different questions in order to win points for their house. Some of these required speedy responses, while other rounds included putting books of the Bible in order and guessing who or what certain characters were from the Bible. The overall winners were Newton, followed by Wycliffe and Tyndale. The audience participation was wonderful and we thank our noble scorers, Mrs Nixon and Mrs Murray. It was wonderful to see quite a few parents there to support the competitors as well.

See you all at the Junior Tournament!