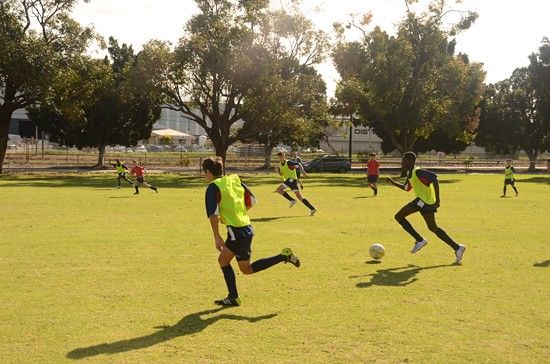 The Year 7/8 boys team got off to a very good start to the day with a 4-0 win over Kings College. Diego Riffo-Vera and Freeman Nyatsambo were dominant in the midfield, controlling possession and creating a lot of play going forward. The team continued their good form in their next game against Dale, winning 4-2. Bronitun Pal Suk and Delton Astell were solid down back, whilst Esteban Weenser and Bupe Muyola finished their chances clinically up front. Unfortunately, the next two games did not end with the same result, with 4-1 and 3-1 losses coming at the hands of Thornlie and Dale respectively. Overall, the boys put in a very solid effort, playing a very good style of soccer all day.

The Year 9/10 boys team played a commanding game throughout the day, easily accounting for their early rivals from Kings College and Mundaring, but lost a tough game against Thornlie Christian College 1-0. They were set to play Dale in their last round and needed a win to secure a spot in the final as Dale had also only dropped one game. Jack Pleysier and Jon Bird were a wall of defence and gave little away at the back while Jackson Nyatsambo and Shani Joyi were integral pushing forward. The boys won the game to meet Thornlie again for the final and were hoping for a reversal of scores from the previous game. In this game, the whole team shifted up a gear and played a most impressive and dominating game.

Damien Pedrotti was outstanding all day in goals, and pulled off some mighty fine saves to keep the clean sheet, but at full-time there was no breakthrough upfront. The game was to see 5 minutes extra time before it would be decided on penalties but Rehoboth had the momentum through this period of time. Cam Strickling took his chances on the edge of the box, which was too hot for the goalkeeper to handle, and it found the back of the net. The goal was only trumped by Cam’s celebratory knee slide! With the clock ticking towards full-time, Mwamba Kabanda volleyed across from close range to find the net and Rehoboth secured a 2-0 final win. A fantastic team effort by the boys who lifted when needed and were justly rewarded for their great sportsmanship and hard work. Well done boys!

The Year 7-10 girls team played a dominant game clearly showcasing the skill and depth of talent we have here at Rehoboth when it comes to Sport. The girls overcame the competition with relative ease with the only major resistance shown by Thornlie Christian College. The girls showed excellent teamwork and continual effort which allowed the team to keep a clean sheet for the whole day (not conceding any goals). They were to meet Thornlie again in the final, and again an impressive display was put on by the girls, with a free kick goal from Nikita Strickling seeing Rehoboth win the Championship 1-0. Well done girls on going unbeaten!