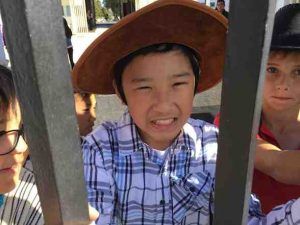 On Monday, 15 June, the Year 4 and 5 students went on an excursion to the Fremantle Prison, Round House, and the Maritime Museum.

When we arrived at Fremantle Prison our tour guide, Ian, gave us some background information such as when the prison was built, who built it, and some of the prisoners it held. After that, he took us to see the cells that the prisoners had to live in. They were filthy, closed in, and the beds were small and very uncomfortable.

Moving on from these cells, Ian took us to see the whipping area. This was where the prisoners who had committed unacceptable acts, like trying to escape, would get whipped with the cat-o-nine tails. Seeing this place made me feel sorry for the people who were whipped because it would have hurt having the skin ripped off your back.

From there, we were taken upstairs to see a cell that had many amazing paintings inside it that had been done by the prisoner of the cell. We also saw Moondyne Joe’s cell. He was a convict who had escaped from Fremantle Prison four times, but was caught each time!

After visiting Fremantle Prison, we walked to the Round House. I learnt that it is the oldest building in WA. We then ate our lunch on the Esplanade and walked to the Maritime Museum. I thought the museum had a great display of boats, sea creatures and other underwater objects.

We boarded the bus feeling exhausted. I had a fun day with my friends learning many interesting facts about WA’s past.