Numbers, Numbers All Around! 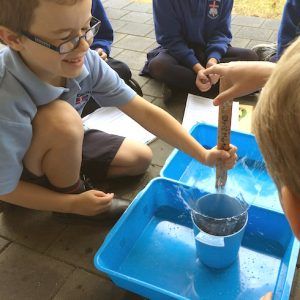 What a fun day was had with our whole-school Numeracy Group activities. Every Term, classes join together to celebrate and learn more about a concept within mathematics. Keeping with our whole-school theme One School – Many Nations, many of the classes focused on numeracy games from other countries! Here are a few snippets of what each class did:

Pre-Primary enjoyed participating in a range of rotational mathematics games. They had to order numbers on a number line, make patterns, and sort materials into groups according to rules they had to create themselves. They also explored measurement using a balance scale where they had to use paper clips to measure the weight of sea creatures.

Years 1 and 2 competed in The Potato Olympics, which focused on measurement and data! Each student was given a potato to decorate, provide its name, age, and its favourite sport. The students each had to weigh their potato and compare weights with other students in their group, and then to order their potatoes according to their weight from the lightest to heaviest. The Potato Olympics then began with groups competing in rolling races measuring in feet, centimetres, and meters. Other groups looked at water displacement in a potato dive contest.

Years 3 and 4 looked at mathematics games from around the world. They focused on four different countries and numeracy games that are played there. Some examples include: Japan (Sudoku); Australia (Dice Football); United States of America (Game sticks) and Brazil (World Cup Soccer Game).

Years 5 and 6 learnt about other countries around the world by participating in a variety of activities. The ICT quiz asked students to list as many countries in the world as possible. The winning team where able to list 101… how many do you know?! “Population Pyramids” involved students creating charts that represented the age and gender of various countries. “Religious Groups” was a task where students had to create a pie chart to show the different religions for various countries.

By the end of the Numeracy Groups, students had learnt a great deal and lots of fun was had exploring different topics within numeracy. We hope you enjoy some photographs that were taken during our Numeracy Groups.