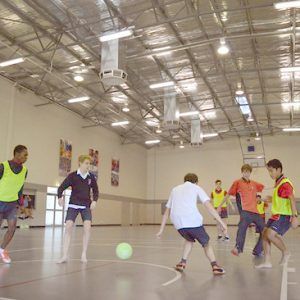 The competition kicked off in Week 3 with the senior girls matches. The first of the round robin games was a tight contest between Newton and Tyndale. Wycliffe won their first match, but Newton finished on top with a big win over Wycliffe in their last encounter.

In Week 4 the senior boys played some fast-paced and entertaining lunchtime matches. The first two matches were tight contests, ending as 2-2 draws. In the final game Newton finished strong with an impressive 3-0 win over Wycliffe.

Newton House have a big points advantage heading into the junior round robins in Weeks 7 and 8.

On Tuesday this week our Intermediate Boys and Senior Boys teams travelled to Southern River College for a double-header.

The Intermediate Boys struggled to maintain shape and possession in the first half, to find themselves down 3 goals at the break. The team started the second half with renewed intensity to claw their way back to 3-3. When our opposition scored a fourth goal, Rehoboth fought back hard to level the game at 4-4. An amazing team comeback and a great individual performance by Jon Bird with a hat-trick!

Our undermanned seniors showed some of their potential in a fast-paced and physical match. While we had some chances to score, we were outclassed in the first half and found ourselves 3 goals down. The boys showed determination and focus to get one goal back in the second half before our opposition scored once more to lock in the final score of 4-1.

Special thanks to Brady de Hoop for some skilful goalkeeping and for playing both games.