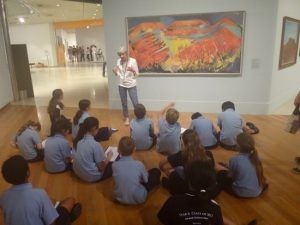 On Wednesday, 4 November, the Wilson Year 5 and 6 classes went on a riveting excursion to the Constitution Centre and the Art Gallery of Western Australia.

After arriving at the Constitution Centre, each year group had their own guest classroom, where the Year 5 class took part in a “Lawless Town Bingo” game to compare and contrast “Rules and Laws”, as well as sharing their knowledge in a big quiz on the “Three Levels of Government”.

The Year 6 class learnt about Australia’s Federation and finished it off with the “Constitutional Challenge” to see just how much they know about Australia’s law book. Both presenters spoke very highly of the engaging and polite Rehoboth children.

After a quick soccer game on the green in front of the Constitution Centre (and an even quicker lunch), the bus took us to AGWA where we had a guided tour of some colonial and modern Australian artists. The students were enthused and thoroughly enjoyed sketching their favourite art pieces as well as contributing to questions around the elements of art.

Perhaps the most exciting (and melodious) part of our excursion was the last few minutes where the students were able to make their own music in the Cultural Centre’s Music Garden.

A great excursion was enjoyed by all; seen in the students’ comments below.

A big thank you goes out to the parents who joined us on the day.

“I enjoyed seeing the Australian Impressionist artists and their way of doing the Impressionist style. It’s fascinating how those artists can combine colours so perfectly with paint!” – Nathaniel, Year 5

“I enjoyed the bingo and looking at the difference between ‘Lawless’ and ‘Lawville’.” – Anna, Year 5

“I learnt about Federation and that New South Wales has the greatest population.” – Ryan, Year 6

“I enjoyed Frederick McCubbin’s painting and being able to learn about them.” – Jack, Year 6