Addressing the Issues: A Message from a Year 12 Student

Last week, Josiah Kappert, one of our leaving Year 12 students, delivered an address on the final day in a farewell assembly to our Year 7-11 students. I thought that readers might be interested in what he had to say, and I have included most of his address below. For all those who have come to know Josiah over his time at Rehoboth, he is a remarkable young man. 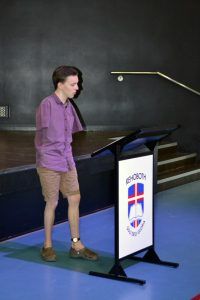 Now I come, on behalf of the Year 12s, to present for you something that is very close to my heart. It’s a topic that I believe that students struggle with the most, and that is identity. What is identity? Well, identity is who we are. The “buzz” words that match identity are world like, different, set apart, and unique.

The whole idea of identity is that each of us is different – but we are all created in God’s image. Therefore, you guys are equally as important as the person next to you, but that doesn’t necessarily mean you’re the same.

The way in which identity becomes an issue is when this thing I call the “Box system” comes into play. In a nutshell, this is how each and every one of us puts each other in a particular box and assumes that that is who they are. People are good at soccer or are super confident or really good-looking suddenly become the ‘cool kids’ because that’s the box that they have been put in. Just because somebody looks good or sounds impressive doesn’t mean that’s most important to them.

Now, I’m not trying to say that being great at sport or good looking is bad. On the contrary, I praise them for being confident in who they are. The problem arises when others begin to frame them as this certain person. This strange movement I’m making is supposed to be drawing border. Its times like this that I really wish I had arms.

Nobody in this gym deserves to be framed. God made us who we are and it is our job as an individual to decide what our passions are and what we will become. I want every one of you to take a moment to think of the person next to you. Do you put a frame around that person as a “cool kid” or as purely lame and/or a weirdo? We must realise that everyone has equal potential to be whatever they desire. It’s like the old saying goes, “don’t judge a book by its cover.”

However, we must take this a step further. We need to find the identity in others because only then will we truly know who someone is. I learnt about a guy in Year 7 this year. Great guy, quiet and kind […] At some point I discovered that he spoke Turkish […] like they speak in Turkey. I mean, not only is that language hugely uncommon in a place like Australia, but it would take somebody incredibly talented and gifted to learn such a dialect.

The thing is, that’s just one example of one thing that makes him who he is. Plus, he’s just one guy in the whole school…

Over the past few years […] I’ve found more and more that people love talking about themselves. Why wouldn’t they? They’re unique! As a Year 12 leaving you guys this year, I would encourage you all to talk to one another and find their personality, what makes them, them. Show an interest in what makes them happy, even if it not just a hobby. You might be very pleasantly surprised with what you find out about others.

God has created us all equal in his image. Do you know why you are here? Well, it’s on your shirt right now. It’s very important in our school, so important that it is our school motto. Soli deo Gloria is about giving God the credit in everything that we do.

Now that doesn’t mean that every time I walk through a door I shout, “Praise the Lord,” or when I finish writing my exams in a few week’s time, I yell. “Amen” […] Giving glory to God is when we set an example for others to follow. [It is] when others notice, and we tell them what we profess – that Jesus died for our sins so that we can now have eternal life.

The biggest reason that people don’t spread this gospel is because they fear persecution. I understand, and you understand too. Nobody likes being bullied and teased for what they believe. It takes a lot of guts to stand up for your faith in the secular world. Life isn’t easy. I don’t recall any time in the New Testament where God, Jesus or the apostles said anything about life being fine and dandy where everyone eats cotton candy and sits in a circle sing kumbaya.

I know when I die, life won’t be lost. It will be renewed and refreshed, and perfect. I’ll have arms then – something to look forward to! That is why we stand unashamed for what we believe.
We Year 12s are about to begin our next chapters as shining examples in this world […]

So right here, right now in this place … can you open your eyes and see each other for the uniquely gifted people that you are? You don’t know the impact that one conversation can make. So be brave and love each other, for God’s glory alone.