Addressing the Issues: What Makes the Wise Men Wise? 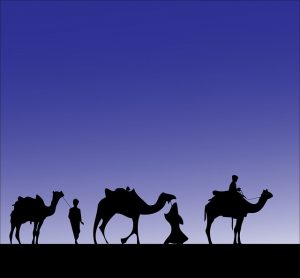 The story of the wise men is an interesting one.

For one thing there weren’t necessarily three. There were three gifts, that’s why we assume there were three wise men. Secondly, they are invariably pictured on camels. The Bible says they rode, but it doesn’t say on what. We assume they were camels, because they came from the East, but we need to be careful and make sure that our understanding doesn’t come from Christmas Cards, but from what it actually says in God’s Word.

The wise men went in search of a king, and found their way to Herod’s palace. They had wrong expectations and therefore ended up looking in the wrong places.

As I read this story, it seems to me that there were three wise things about the wise men:

They adjusted their expectations rather than their vision

Unwise people give up on God when disappointment or trouble comes. Trouble or disappointment isn’t necessarily a sign that you are being tested or that you aren’t on the right track. Perhaps you just need to adjust your time frame.

They were willing to ask for directions

The attitude of “no-one can teach me or tell me anything” is unwise. The wise men stopped at Herod’s palace, but they also knew when to move on. Proverbs 12:15 says that it is “A fool [who] is wise in his own eyes”.

They stayed open to God’s leading, even when they had a measure of success

The attitude of “I’ve made it” can be an issue. People forget so quickly what they did to get them there. The problem isn’t that God has stopped speaking, but that in the busyness of life and success, we have stopped listening. Sometimes we only look for leading when we get into trouble.

The wise men didn’t just start well, they finished well. Jesus didn’t just get born well, but He died well. Even in death, while He was dying for the sin of mankind, His amazing grace is shown by His concern about His mother and John, the thief crucified next to Him, and those who were crucifying Him. He was so concerned about others that He said, “Father forgive them for they know not what they are doing”.

We serve an amazing Jesus.